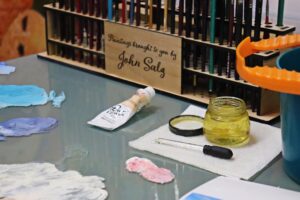 Ideas have this way of shaping themselves sometimes. I can go into my studio with an idea of where I plan on putting paint that day, but the key to creativity is being open to reshaping that idea (sometimes a few times over). Your jumping off point, or your first idea, is rarely the concept you end up with. I’ve learned to trust my intuition and allow my imagination to take rein. 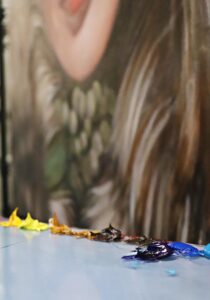 I want my creations to be something new, something that hasn’t been seen before. I want colors to jump off the canvas at you, to pop against each other. I love the feeling when a piece of artwork doesn’t seem to take “no” for an answer- it simply demands your attention. If you’ve ever visited the Art Institute of Chicago and have crossed paths with the room full of works by Monet and Renoir, you know... Those canvases just capture your attention every single time. 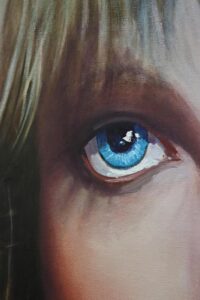 I like to think that a good idea has potential to keep building on itself. My previous part of this series was “Venus de Vegas”, a gorgeous showgirl who emulates everything fabulous and over-the-top in all the right ways. I’m thinking the next Venus may be more chillingly beautiful, with icy blue eyes that may seem stark, but never cold (unlike her typical terrain). Stay tuned.