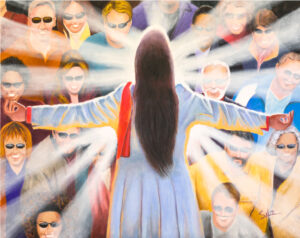 I'm soon introducing a few new paintings to the gallery. Let's start with "White Teeth''. Lucy lights up the after-party. Her shimmering set of chompers is the real star of the party, capturing the crowd's attention with its blinding shine that no Crest or Colgate commercial could hold a candle to.

Have you ever seen someone with teeth so white that you nearly have to squint to look their way? An experience similar to this is what planted the seed for "White Teeth". A visitor at our home may have blinded me with her smile, but opened my eyes to a new idea. Much later, that intense white smile popped into my head along with all those commercials that promised the whitest smiles ever. It wasn't much of a leap to imagine a white smile that was so bright it pulsated with rays of ultra whiteness over an admiring audience wearing sunglasses. 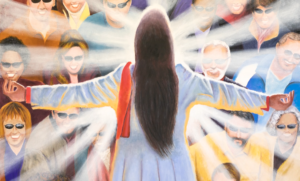 Inspiration strikes in the most mundane of moments, whether it’s reminiscing with good friends about old ideas or simply being blinded by your houseguest’s luminescent smile. Either way, the best thing to do is grab hold of the idea and let it guide you to your next brilliant creation.