The Count of Singularity 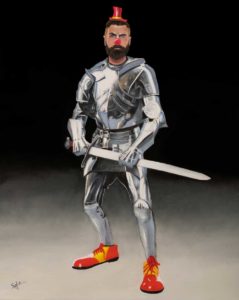 The Baron started out as a Count. Originally he had all the same armor but he had the head of a rather menacing robot. And his title was "The Count of Singularity." You know, when robots and Artificial Intelligence take over...then Arnold saves the day.

I decided that this scenario was too dark. So let's lighten things up. Maybe this super-macho-armored guy is wearing house slippers. During the search for the right house slippers, I stumbled on clown shoes. Even better. And it lends itself to a couple of other props...clown nose and hat. 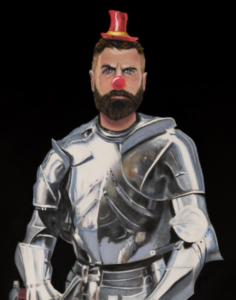 My point is that some ideas have a mind of their own. You just have to be open to reshaping it. Picasso has a quote about this. He talks about starting with an idea and ending up with something quite different. Now, I would never compare myself to Picasso, but the process is the same.

Painting armor is a challenge. Like putting together a puzzle with subtle color changes and value shifts. The Baron's expression needed to be strong and realistic. Being really serious is sometimes really funny.

The last piece of the puzzle was the title. Bozo? Clownavich? Boobikoff? What about: Baron von Bobo? Sounds right. The Grand Knight of Freedonia is a reference to "Ducks Soup": the Marx Brothers’ classic take on the absurdity of war.

Feel free to take a walk through the gallery and visit the Baron.