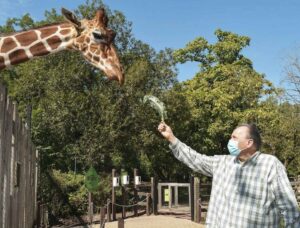 The Brookfield Zoo is a staple to every Chicagoan’s childhood, so when I was lucky enough to be offered a special tour around the zoo in September, I jumped at the chance. This trip brought back a flood of happy and nostalgic memories. I always considered the Brookfield Zoo as a plush, safe community for the animals there. They’re well fed, given the best medical care, and every exhibit is landscaped down to the detail to mimic their natural habitats. I’ve always admired the Brookfield’s dedication to protecting and caring for their animals. 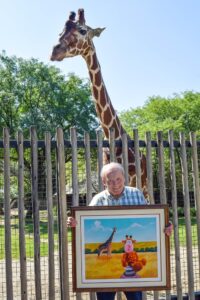 My admiration for the dedication to the wellbeing of the animals prompted my donation to the Brookfield Zoo’s Annual HOWL Event that took place on September 18 of this year. I provided a framed print of Yin & Yang to their auction to raise money for their animal preservation organization. I was thrilled to be given the opportunity to participate in something so amazing and aligned with my respect for nature and its animals.

The concept Yin & Yang was born from a conversation about duality: two coexisting realities. Two animal kingdoms are represented together in a way that I’ve personally never seen before. I kept it simple with two major verticals on a clear horizon to represent a classic trope: reality and fantasy. 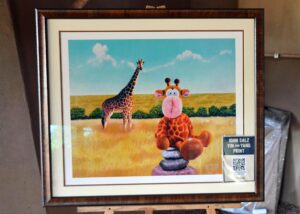 The animal kingdom has lent me enough inspiration to plan on turning my perspective on duality into a series. I like to say that this idea has “legs” in the sense that it’s the idea that keeps on growing. There’s so many ways this could go. Do I look to more safari animals for inspiration? Turn to aquatic creatures for reference? Maybe even get my head in the clouds and let birds be my next focal point? I have my next idea already in mind. Coming soon.