Happy Trails To You 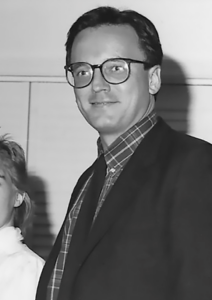 Until we meet again, happy trails to you…

We are heartbroken to announce that earlier this year John Salz passed from this life to the next with devoted family at his side.  His absence is being keenly felt by everyone who knew and loved him; our worlds have all become a little bit dimmer without his vibrant presence.  He was smart, thoughtful, hilarious with an endless imagination and a drive to create.  Some of these best parts of him shine through in his work.  As his daughter, I feel his absence every day.

My dad was born with a gift.  At a young age, he discovered that he could almost perfectly recreate images he saw or imagined using pencil and paper or chalk at the chalkboard.  This natural ability led him to win art contests in middle school which encouraged him to turn his creativity into a life.  After receiving his Bachelor’s degree in psychology, he worked briefly as a teacher before embarking on a long, successful career in advertising.  He was an integral member of the creative team at some of the top agencies in Chicago and later opened his own agency which he ran for 20 years.

In advertising he found not only a creative outlet, but inspiration that he would carry over into his paintings.  He learned that isolating objects in negative space could elevate their significance (Donut, Uncanny) and mastered the art of telling long stories within a single image (Babushka Breakup, Laughing Moon, Venus de Vegas).  Inspiration came from a variety of places: Vermeer and Rembrandt, of course, but also the glamour of old Hollywood, Groucho Marx one-liners, and the Sunday comics.

When life opened up the time and space for painting, Dad fell into a rhythm wherein large canvas works would be completed in a matter of weeks.  He said that his paintings would often come to his mind fully formed.  In a second he would have the full layout, concept, and imagery, which he’d sometimes have to sketch out quickly to ensure all the details were captured.  These were very happy years and you can see it in his paintings: all of his works have a smile in them.

All of his paintings are also meant to start conversations with the viewer.  They’re an invitation to contemplate, to ask and answer questions.  He would say that his work often acted like Rorschach tests with each viewer bringing their own unique interpretation to the table.  He loved to hear what other people would see in his work.

I was always in awe of my dad’s artistic gifts, which in my childhood he would often employ to the delight of my sister and I.  I remember how detailed and realistic the Burt and Ernie pumpkins he’d carve at Halloween would look on our front porch, a highlight for trick-or-treaters in our neighborhood.  Every Easter, he’d dye an egg half blue and with a felt tip marker draw a wide grinning Humpty-Dumpty clad in blue jeans (ala illustrator Milo Winter).  I remember the assembly of brushes in the part of our basement that acted as his art studio and showing off “Shaboom” to my friends.  He would give beautiful portraits as gifts to members of his family - an incredibly thoughtful and special gift to carry through one’s life.

Dad passed on March 6th, 2022, exactly 30 years to the day after losing his father.  He leaves behind a large and loving family including his wife, daughters, a son in law, sisters, nieces, nephews, great-nieces and great-nephews.  To honor the vision he had for his artwork, Salz Paintings will continue to be managed by members of his estate.  We are all grateful to have known him and heartbroken that he’s gone.   I wish you could have known him too, but having his art with us is a comforting reminder of who he was.

With love from your daughter, Jessica Salzinski